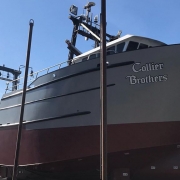 I would like to share with you a story about a family in Oregon that bought a fishing vessel about 42 years ago in southern Alabama. The family traveled to Alabama from Oregon, and bought the F/V Collier Brothers.

I will go into detail about the vessel, and walk you through some of the major changes that she has undertaken. She is an all steel, uninspected commercial fishing vessel. She is a single-screw vessel with a 1000 horse powered Caterpillar diesel engine. The Collier Brothers is a family owned vessel that has been in the same family since 1978 — the year that the vessel was built. The vessel has undergone many significant changes and advancements in the last 42 years.

Her bow has been changed from a vee Gulf style shrimper bow, to the nice and wide bulbous bow that it has today. Her house was replaced some number of years ago to give the owner and crew more room. Her fish hold has been expanded in order to hold more product and to add to the owner’s financial gain.

Throughout the years, the owner had desired to expand the 24-foot wide breadth of the vessel, so that his crew would have a more stable platform to fish from. In August of 2019, the owner contacted Giddings Boat Works, and said, “I want my boat to be wider, and I need it to happen fast.” Giddings accepted the job, and immediately began drawing up a proposed contract. The owner subsequently contacted Bruce Culver, a principal engineer in Seattle, WA, and finalized the plans for the approximated 12-foot expansion of the Collier Brothers.

The first detail I would like to expand upon, is the stick-built style sponson job, accomplished by Giddings’ talented and seasoned workforce. This style is the old way of completing a sponson job, opposed to having the vessel lofted and the parts precut, formed, and fabricated. The shipyard takes the engineering plans and begins the layout from the blueprints that have been drawn by the engineer. At this point the crew takes batten sticks, and they start to form the shape of the vessel.

The battens can be adjusted in and out, or up and down, in order for it to appeal to the vessel owner and to the engineer. This gives the vessel the shape and lines that the owner imagined, and it will affect how the vessel will ride and float, once in the water. With a stick-built sponson, every part is laid out and cut by hand to meet the shape of the batten sticks, forming the final shape of the vessel.

I know that this sounds overwhelming; that is because stick-built sponspons are intensive tasks to take on. As a matter of fact, this style of work is similar to building a ship from scratch, and in certain respects, it can be even harder. This is because, this job is done without having full engineering plans to work from, and in a modern-day shipyard, the vessels are fully engineered and pre cut by machines. To expand further regarding the incredible aspects of the work done on this vessel, not only did Giddings complete this substantial task — cutting and fitting each piece by hand within a period of five months — we did it under the proposed budget, while surpassing the expectations of the vessel’s owner.

This example is exactly what makes Giddings a cut above the rest. If this story resonates with you, and you have been thinking that you want your vessel to be widened, lengthened, or for the capacity to be enlarged, give Giddings a call. The owner and engineer will coordinate with you to create what you envision for your vessel — whether that be a stick-built sponson, like in this story, a lofted sponson, or a new build, we can make it happen, because that is what we do.